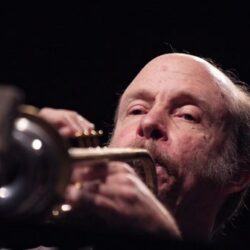 Through my own professional experience and over fourteen year of teaching trumpet, I’ve discovered that regardless of the style, there are certain basic physical elements that every student must master. This applies to everything from Jazz and Latin Jazz, to Mariachi, Ethiopian, Salsa, and Classical. Before a student can truly enjoy him or herself on the instrument, they must do the foundation work to remove the physical obstacles of manipulating the instrument in order to express themselves with ease and fluency. As a teacher, I’ve learned to use a variety of approaches in order to effectively communicate the principles in a way that will resonate best with each individual personality. Success builds on success, bringing enjoyment, motivation, and enriching musical experiences that will last a lifetime.

Tom grew up in Denver and attended University of Nevada at Las Vegas, simultaneously launching his career as a professional musician in various Las Vegas house bands backing up such artists as Wayne Newton, Ginger Rogers, Robert Goulet and Bobbie Gentry. He studied trumpet with Walter Blanton and John Carlson, improvisation with Ralph Towner, Paul McCandless, Ran Blake, George Russell, and Jerry Bergonzi, and theory and composition with Joe Maneri. Tom is currently on the faculty of Braintree Public Schools, Cambridge Public Schools. He has been a Brookline Music School faculty member since 2001.

Tom moved to Boston in 1979 to pursue more creative musical endeavors. Since that time he has become a mainstay on the jazz, rock, salsa and mariachi scenes in greater Boston. Tom has led the improvisational chamber group Gate 5 and served as musical director for Mariachi Mexamerica and Grupo Panamericano, along with being a charter 16 year member of the Either/Orchestra, appearing on all of its recordings and all performances. He has performed or recorded with Morphine, Throwing Muses, Cab Calloway, the Four Tops, Juliana Hatfield, Joe and Mat Maneri, Club D’Elf, Ran Blake and others.