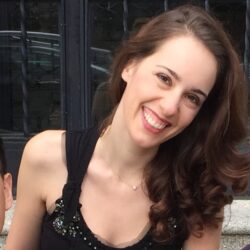 For students of any age or level, playing the piano should be enjoyable and inspirational. I seek to involve students in their own music-making process, giving them some say in which pieces they play, discussing why they like some pieces more than others, and so on. I tend to emphasize expression, beauty, and emotions in music most of all, while incorporating more technical aspects of playing, such as scales and theory, along the way. I have found that, for young students especially, discovering the fun and excitement that comes with playing piano can help foster a love of music for years to come.

Sophie Scolnik-Brower holds a masters degree and graduate diploma from New England Conservatory, where she studied under Vivian Weilerstein; she profited from the guidance of Randall Hodgkinson and Mana Tokuno during her undergraduate years at Harvard University. Other formative teachers and coaches include Kim Kashkashian, Lucy Chapman, Max Levinson, Robert Levin, and the Boston Trio. Currently teaching at Brookline Music School and the New School in Cambridge, Ms. Scolnik-Brower has taught at Concord Academy, Charles Sumner Elementary School in Roslindale, and Cemuchca Music School in Cap Haitian, Haiti, in past years.

Pianist Sophie Scolnik-Brower has performed across the United States and abroad at festivals such as Perlman Music Program, La Jolla Music Festival, Aspen Music Festival, White Mountains Music Festival, the American Conservatory at Fontainebleau, and Pablo Casals Festival, as well as on WGBH Radio (Boston) and as a member of Mistral Music. As a winner of NEC’s Honors Chamber Music competition and a recipient of the Borromeo String Quartet’s Guest Artist Award, Scolnik-Brower performed in New England Conservatory’s esteemed Jordan Hall in 2014, 2015, and 2016. Most recently, she performed extensively as a young artist at the Perlman Music Program in 2017, as well as with with her piano trio, the Beacon Street Trio, at La Jolla Music Festival's SummerFest in 2016, receiving guidance from luminaries such as Cho-Liang Lin, Itzhak Perlman, and Pinchas Zukerman.