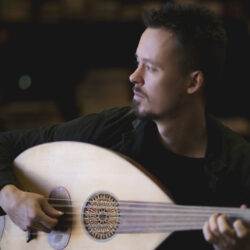 Learning, I strongly believe, begins with having fun. It is very important to me that the student thoroughly enjoys the journey of learning music, and I structure my lessons with this in mind in terms of selecting appropriate repertoire and concepts to cover that are both relevant and interesting to the student, but also help them progress as a musician while exposing them to concepts and approaches they may have not yet become aware of. Growing up in five different countries in Europe, The Middle East and Africa – Finland, Jordan, Tanzania, Oman and Lebanon – has shaped my own identity as a musician to embrace a multi-cultural world, and I feel strongly about passing this openness and what I have learned along my path onward. I am very patient and methodical by nature, and as a teacher, I focus on helping each individual student understand the ‘how’ and the ‘why’, as they subjectively respond to music (the ‘what’), and am strict with myself about never imposing my personal aesthetics or stylistic opinions so as not to stifle a student’s individual tastes and creativity. For me, expressing oneself through an instrument is a primal, social, and at its core very natural reflection of one’s need to communicate with others, and music, by its very nature, has the ability to take this communication beyond words or body gestures into deeper levels of understanding. Since we connect with the world in large part through our own voice and hearing, I find it fundamentally important, as well as fascinating and rewarding, to explore the relationship of one’s own voice and listening skills to playing an instrument. In my teaching, I stress the importance of aural understanding and ear training, as well as an understanding of technique, rhythm, melody and harmony – never forgetting the importance of having fun while doing so – as a foundation towards getting the “instrument out of the way” and getting into that space where you can just play.

With a M.M. degree in Contemporary Improvisation from New England Conservatory and a B.M. in Performance from Berklee College of Music, Jussi Reijonen’s studies with jazz guitar luminaries like Mick Goodrick, David Tronzo, David Fiuczynski and Jon Damian as well as Palestinian oud/violin virtuoso Simon Shaheen and Serbian composer Katarina Miljkovic have had a profound influence on his work as a performer, and composer and teacher. While Jussi’s own musical language focuses mostly on exploring crosspollinations of Arabic, African, Indian, Mediterranean and Scandinavian folk musics with contemporary jazz, he has years of experience as teacher and performer in a large variety of styles, including pop, rock, metal, r’n’b, soul, funk, jazz, latin, Middle Eastern, and West African. Beginning in his high school days back in Finland, he has taught since 1997; in his work as private and group instructor, he has worked with all age groups from toddler to adult, and with instrumental levels from beginner to professional. In addition to his work as a one-on-one guitar and oud instructor in Boston, he has recently also begun taking his work as an educator on the road: his quartet Jussi Reijonen: un recently completed a two-week album release tour of Finland in February 2013, during which they also hosted master classes and workshops at five conservatories – including the prestigious Sibelius Academy in Helsinki – offering students insight into non-Western concepts of improvisation and composition such as the Arabic maqam system and South Indian rhythm solfege or konnakol and their applications into other musical settings.mosaic. Jussi’s Independent Music Award -nominated debut album “un” was released to great critical acclaim in early 2013 on the unmusic label.

Born in Rovaniemi, a small town on the Arctic Circle in northern Finland, fretted/fretless guitarist and oudist Jussi Reijonen is truly the product of a world with few frontiers. Having grown up moving back and forth between Finnish Lapland, the Middle East, and East Africa, and currently living in Boston MA, USA, Jussi has spent his life soaking up the sounds, scents and shades of Nordic, Middle Eastern, African, and now American culture, which are all reflected in his music. Along his path, Jussi has worked – as bandleader, sideman, composer or arranger – with numerous front row artists both in and outside his native Finland, and has performed extensively in Finland, Sweden, Latvia, Germany, France, Lebanon, Canada and the United States, playing everywhere from house concerts to jazz clubs like Scullers Jazz Club and Regattabar to concerts at Lincoln Center and Schomburg Center for Carnegie Hall’s concert series. During his years as a session musician in Finland, he worked in a variety of musical styles, ranging from backing mainstream pop stars like Ari Koivunen (Finland’s Idol winner 2007), Anna Abreu (Finland’s Idol runner-up 2007), to playing oud with heavy metal band Kiuas and West African music with Senegalese bassist Ndioba. After relocating to the US in 2008, he has had the honor of performing with the likes of renowned jazz drummer Jack deJohnette, flamenco cantaor legend Pepe de Lucía, Spanish multi-Grammy-award-winning producer and flamenco guitarist Javier Limón, Palestinian oud/violin master Simon Shaheen, fretless guitar pioneer David Fiuczynski, Turkey’s gypsy clarinet legend Hüsnü Senlendirici, and Lebanese nay virtuoso and multi-instrumentalist Bassam Saba. With his own ensemble, JUSSI REIJONEN: UN, as his main forum for exploring his own voice as composer, arranger and instrumentalist, he has been working to combine his myriad influences into his own unique musical handwriting. Reijonen’s original music draws from a wide pool of influences and experiences gathered growing up on four different continents; in both his original compositions and his playing, the open spaces and silences of Scandinavia rub shoulders with the maqamat of the Arab world and the rhythmic richness of India and West Africa, creating a truly enchanting musical mosaic. Jussi’s Independent Music Award -nominated debut album “un” was released to great critical acclaim in early 2013 on the unmusic label.