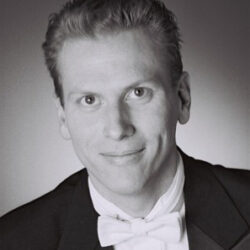 John Ferguson’s versatility as a musician has enriched not only his performances, but also his wide-ranging work as an educator. He has taught piano students of all levels—in community music schools, private lessons, and as an Associate Instructor at Indiana University. He has also served as Adjunct Professor of Conducting at Atlantic Union College in Lancaster, Staff Accompanist at Boston Conservatory and Emerson College, and string instrument teacher in several public-school programs in Boston. He currently works for the Brookline Public Schools, where he has taught string instruments and conducted the Brookline Youth Orchestra and Townwide Orchestra since 2006. Ferguson’s own performances have been praised for their “proselytizing zeal—along with fleet fingers, power, and fine dynamic control” (Boston Globe) and “impressive qualities of pianistic brilliance, strength, intellect and sensitivity” (Sacramento Bee). Ferguson has performed solo recitals in major cities throughout the US, including concert series and festivals in Boston, New York, Los Angeles, Chicago, Philadelphia, San Francisco, Sacramento, San Jose, San Diego, Newport, and Providence. Ferguson’s performances have been heard on radio stations WFMT-Chicago, WMBC-Baltimore, KZSU-Palo Alto, KUOP-Stockton, and WFIU-Bloomington. Ferguson is an active chamber musician in the Boston area, having performed at Jordan Hall, the Longy School of Music, Boston Conservatory, and Boston University among other venues. As an orchestral soloist, he has recently appeared with the Melrose Philharmonic, North Shore Philharmonic, Atlantic Union College Orchestra and Mozart Society Orchestra at Harvard University. John Ferguson holds a Doctoral degree in Piano from Indiana University, where he studied with Edward Auer and Menahem Pressler. As an undergraduate he majored in both Piano and Violin at the University of the Pacific Conservatory of Music, and as a graduate student at Indiana studied conducting, composition and violin intensively while earning his degrees in piano.