The BMS Community is currently learning online -- we welcome students of all interests and ages, from young learners to adults. 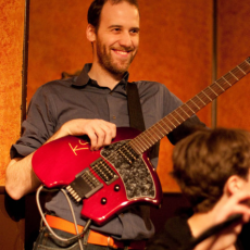 My goal as an educator is to help students cultivate good habits in learning. With music, we exercise our senses of creativity, perception and imagination. These expressions can be developed and realized as skills through study & practice. As a guitar teacher, I help keep focus and provide direction while offering support in that journey.